As a kid, I always look forward to summer. For my siblings and cousins, it meant afternoons of running outside and playing patintero, luksong-baka, shato and chinese garter, squeezed in a trip to the beach or two. At the end of each day, we’d have dirty hands and feet, an occasional scratch on the knee but with happy, cheerful hearts.

It was the best.

Admittedly, that’s not the case nowadays. With how scary and alarming the news are, most kids have very limited physical and social activities outside school. More often that not, it’s just TV or iPad time for them which is sadly even more alarming. 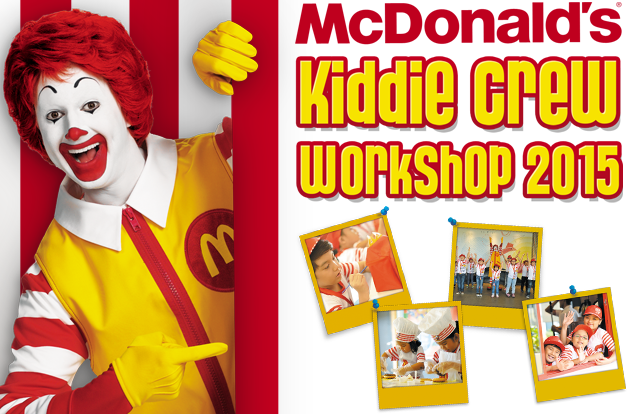 Kaya when Ate Cesca saw the McDo Kiddie Crew poster on their SM Bicutan branch and begged us to let her join, we were sold.

We were given a form to sign up and asked to pay the P650 registration fee. At first, I though this sounds too much but upon seeing what were included made me realize how sulit it was! 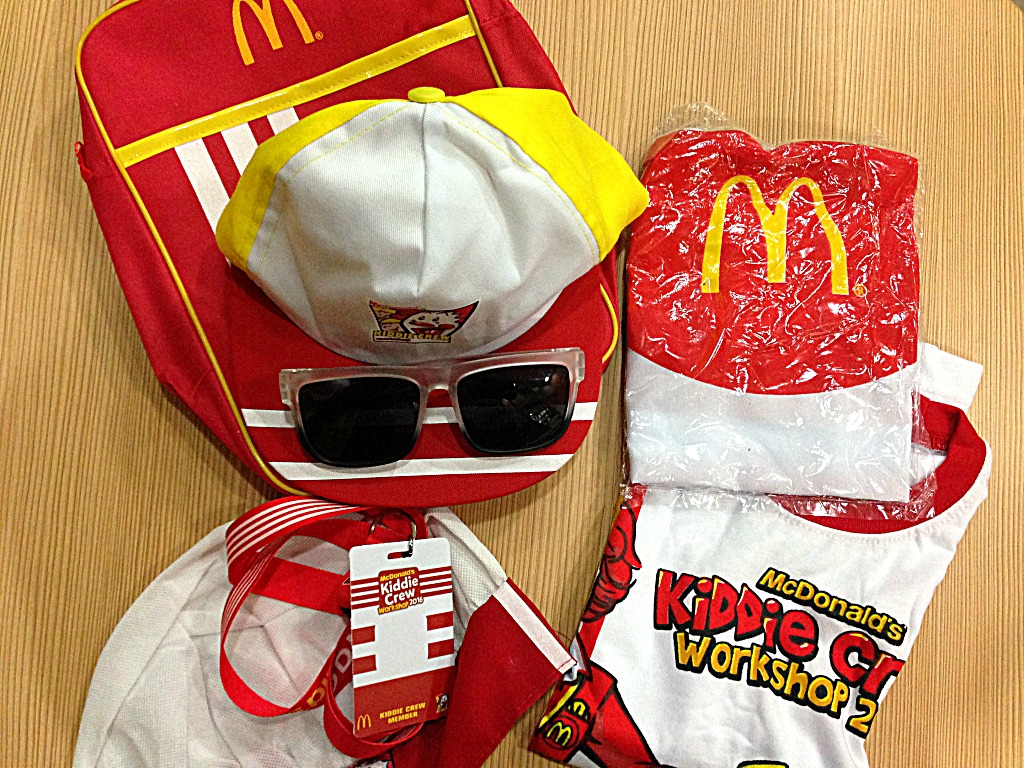 What’s included are the following: a shirt, cap, bag, artwork materials, pins/badges at the end of every activity, certificate and meals for 5 days!

We chose the morning session (10AM -12PM) when the mall just opened and there are less people.

For 5 fun-filled days, the little Ate got to tour the store’s kitchen and see firsthand how her favorite Mcdo dishes were made, sing and dance with her new-found friends, welcome patrons to the store, serve food and drinks, ring up customers in the counter and her favorite activity, make her very own McDo cheeseburger.

Since the store is inside the mall, they don’t have a drive-thru. They do have an express counter though and on the first day, the little Ate got to play cashier here. 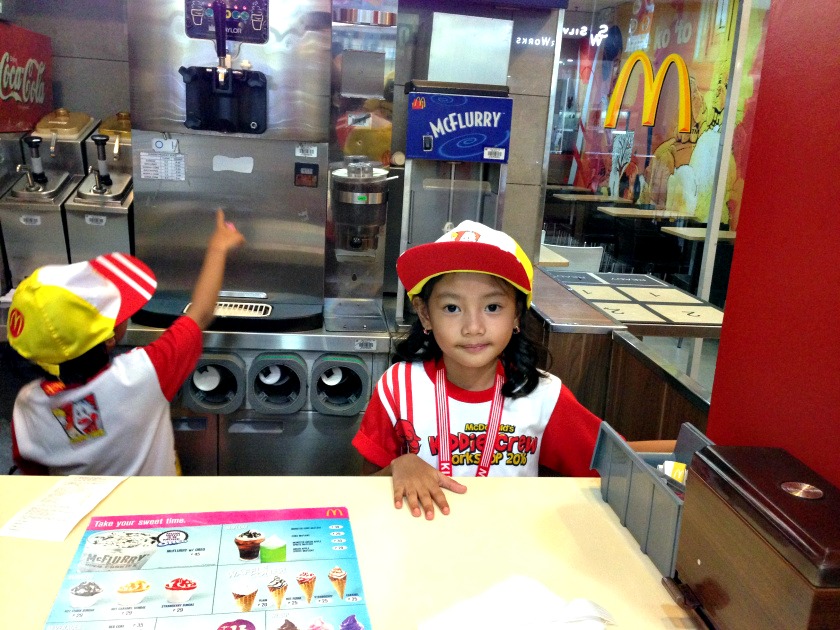 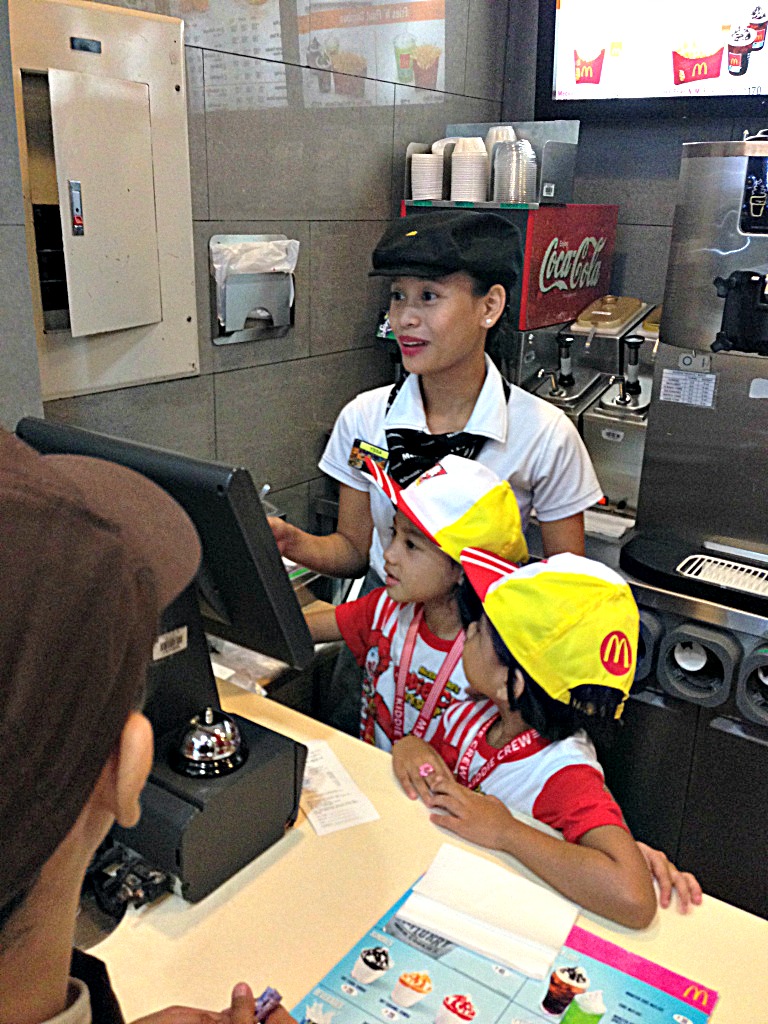 They also get to work behind the counter and do drink drawer duties. 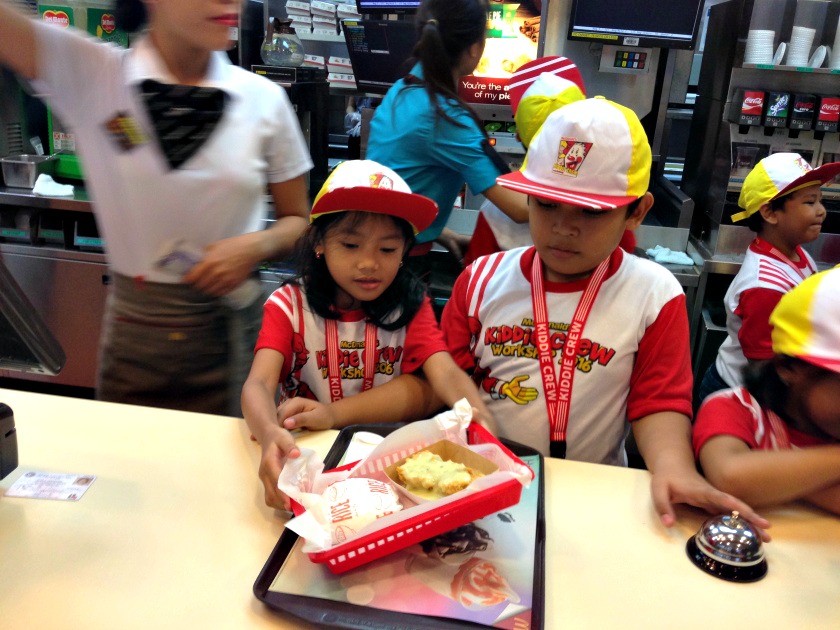 The activity she enjoyed the most was when they prepared and assembled their own McDo cheeseburgers. 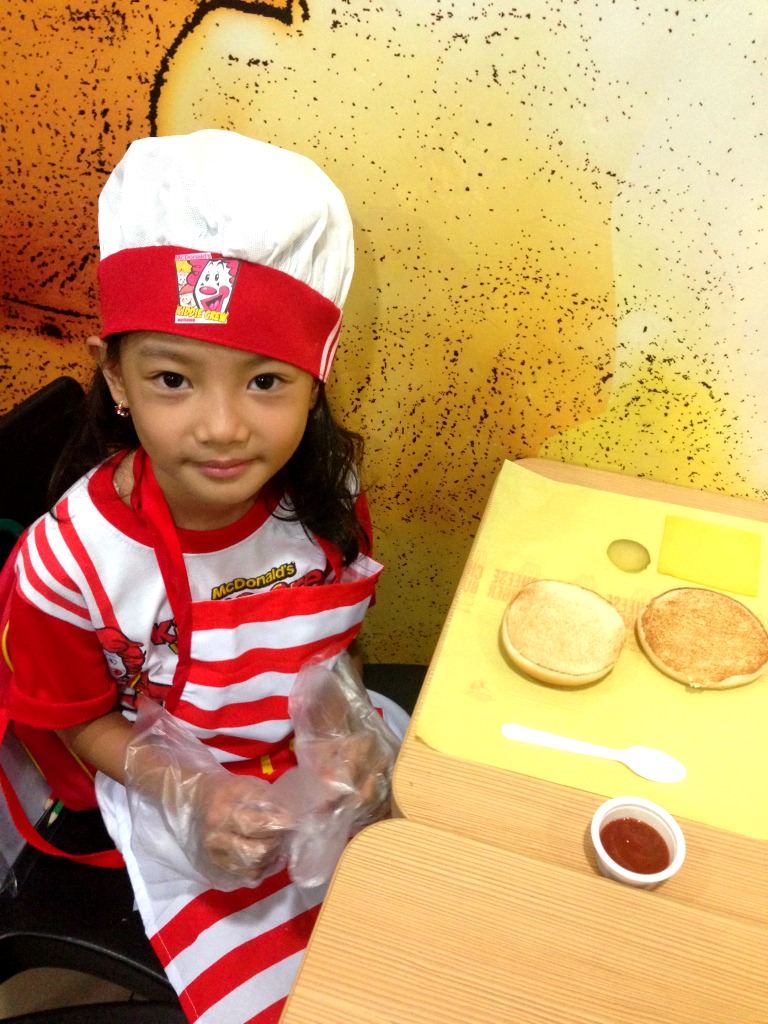 They were also given the task to greet customers. Such pretty greeters!
The workshop features different values formation lectures : hard work, responsibility, discipline and sharing. Their creativity are harnessed as well since they are encouraged to create their own scrapbook showing that they did that day.
But what I liked the most with this experience were the social skills my daughter developed in that 5 days. She can be a bit demanding at times but being with kids her age and working along side them, she learned to give way to others. She was also able to build up her confidence in interacting with different kind of people.
She also found new friends and can’t stop talking about them!

Holding hands while waiting for the fries talaga?! haha

Sharing stories while having their meal after a ‘hard day’ at work.

Kikay talk while on shift 😀
They had a graduation ceremony on the 5th day where they sang and dance and were given certificates and badges. 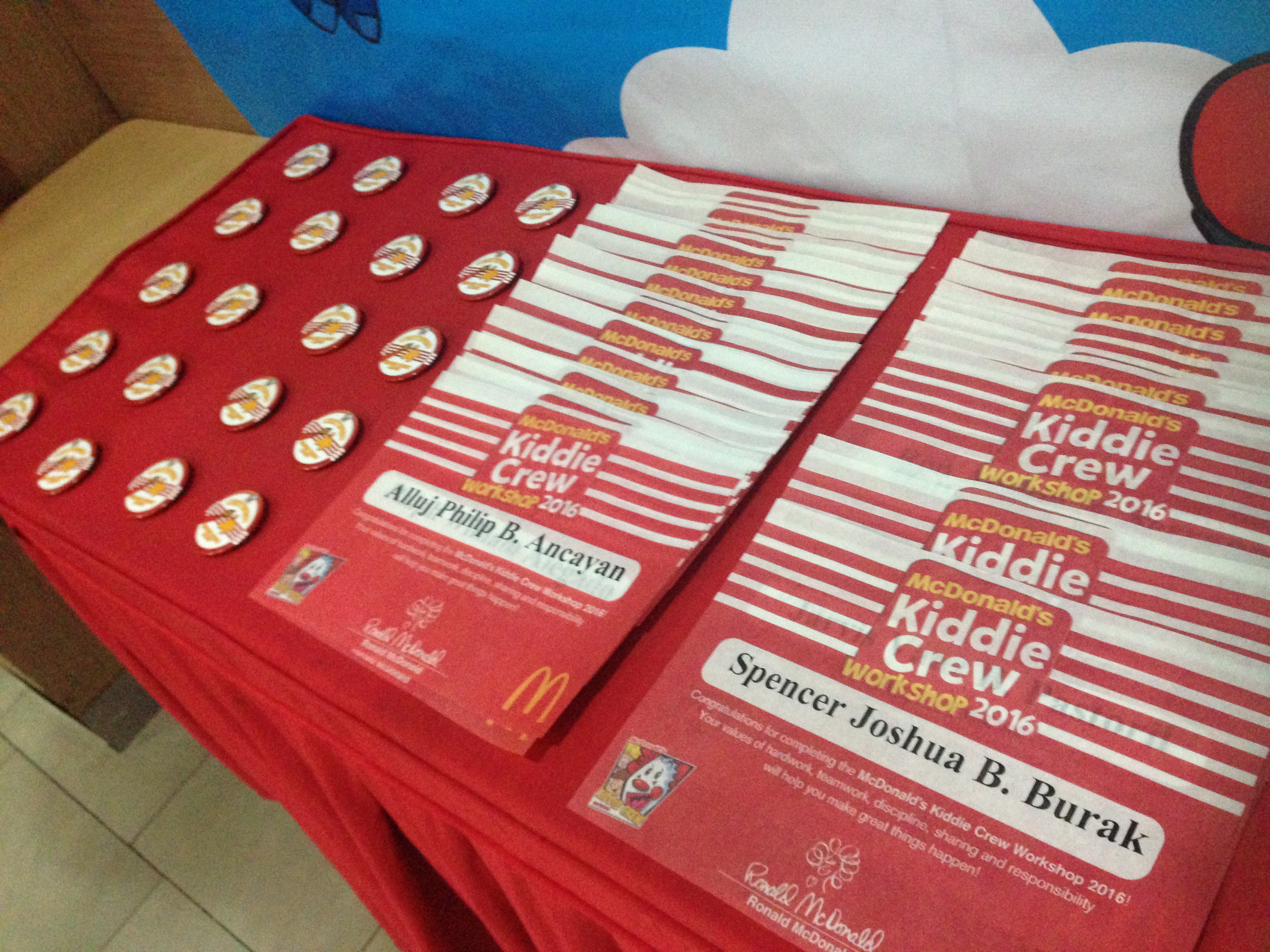 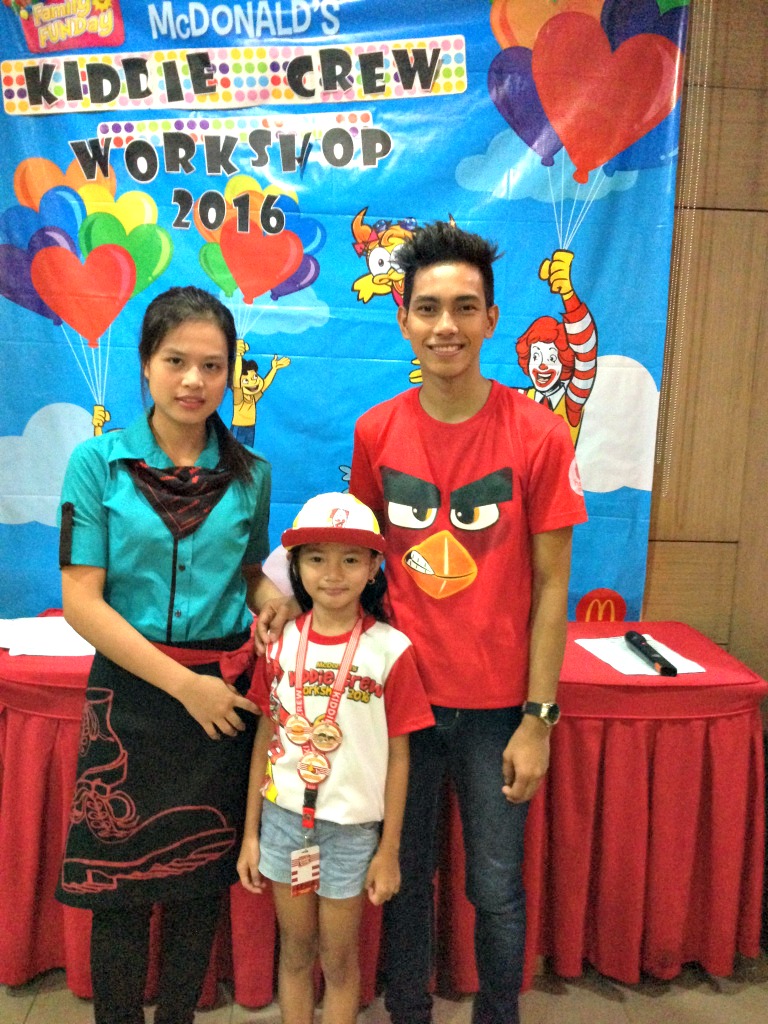 She kept raving how she had much fun she had!
I have to commend as well their facilitators and the rest of the McDonald’s crew who were very nice and ever so patient with the kids. I’ve never worked in a fast food restaurant but my husband did back in college and he can attest how patient-testing it was dealing with customers. Much more to young kids who are curious with just about anything. So thumbs up to you guys!
The little Ate had quite a jam-packed summer (Read her experience as an SM Kiddie Patroller) and she’s now ready to go back to school. But she enjoyed her McDonald’s Kiddie Crew stint so much that she already made us promise to let her come back. And we surely will!
I believe registration for this year’s workshop is already finished but since this is an annual summer program, you can line this up for next year’s activity. 🙂

Mommy Kach is Kati – your average-everyday-mom of 3 who runs on passion and coffee.

Here I overshare my thoughts on Family, Parenting, Food and Life. ❤️